The Further Adventures of Mission of Burma:
The Final Entry, UK/EU 2012

Got to the venue early, so I decided to check out some Dutch beers.  The bar had Barry White cranked, so I knew I was in the right place.  Had a Westmalle Tripel, clear and very strong.  Then a dubbel, darker, not as strong.  Preferred the Tripel.
Later tried a Grolsch Bok – not so great, even on draft, though Grolsch has sentimental value to me (those filp-tops).

Finally, a lame gig!  This elaborate theater (state sponsored, like the festival) had a new type of monitor system we’d never seen before, and a chamber orchestral ensemble before us performed an Arvo Paart composition, then some “local” composers of varying quality.  I had the feeling that we were gonna be like zoo animals on stage in a cage.  Yep.  At first I thought there was hope (Pete and Clint were skeptical from the get-go), but there was such minimal response.  I thought Trem II would get their weed-soaked brains on our wave-length, but no: shortly after that at least half the audience had drained out.  There were 10-15 or so who actually responded to the songs instead of just watching the circus animals go through their trained act.  The Dutch remind me of some rich folks who never had to work for anything so they miss the moment, viewing the world merely with mild disinterest.  We asked Bob how Shellac fared in the Netherlands, and he said the response was so weak that they don’t bother with Holland any more.  So…. it’s not just Burma…..

But still we had a good time walking about the next day.  I went to the M C Escher Museum, and who should appear in the room as I gazed at one of those mathematically hallucinatory images but Mr. C. Conley.  Now we’re back in the van, rainy, on the way to Belgium.

The club in Belgium certainly feels more our style than the one last night.  I suspect rock will occur.

During dinner Bob called up an incredible YouTube video of Neil Young playing “Hey hey, My My” with Devo.  Boojie Boy singing lead from his crib.  Bob said that “The Neil Young People” always take this video down when it gets posted, and in some ways we could see why.  But after seeing it I respect him even more for going so far out on a limb.

Later, rock did indeed occur.  The opening band Mocovo was quite charming, an odd blend of Joy Division and Hawkwind with great drum patterns.  And this show tonight was back on track for us.  Audience totally into it.  (Give us Belgium over the Netherlands, please).  A satisfying way to end the tour, and our second encore was a nailed version of Youth of America.  Great.

Comment from an Italian who was at this show:
“Energy bursted out and lit the very attentive crowd. Some songs were not easy but it was just like Alice in Wonderland. People fell from one surprise into another, songs curved like a rollercoaster and dragged the crowd along. Mere astonishment.”

I was talking w/one of the club people about beer after the set, praising the Duvel (I actually managed to make a pun in Dutch during the set when I said “Danku Duvel”.  heh…. people even laughed!).  He said “Have you tried the Westmalle Tripel?” and I said “yes, better then the Dubbel.”  He agreed.  Then he recommended a local brewerie  – but I no longer recall the odd name – he said “just tell the bar-tender you want “The Parrot”.  And sure enough, it was quite good, in that Belgian direction.

The wonderful rising at 5:30am (after konking out around 1am) did not produce excessive verbosity on the drive, but nonetheless we attained the Brussels airport with mild amusement.  After saying goodbye to Alesh we navigated the lines, boarded the flight, flew, and now have THREE WONDERFUL HOURS to enjoy the Dublin airport!  All right!       They do have the free WiFi here, and decent food.  So we should survive our stay and board the plane to BOS without incident.  Usually there is a Western head-wind going back to the US of A, so I’m planning to roll down the window and fly a kite I bought in Den Haag.  A guy’s gotta get his fun where he can find it.

My book on this tour (when my brain was up for reading) is Virginia Woolf’s OLRANDO.  I was gonna ask everyone what they were reading when we were in the van, but I just never got to it.  Bad documentarian: ought to be removed from the job.
But I’m the one who does it, and the pay doesn’t encourage anyone else to take it over, so…..  uh……  maybe babble to you-all again the next time we play a series of shows. 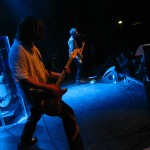 Despite the lame Dutch audience response, we still attempted to rock, with moderate success. 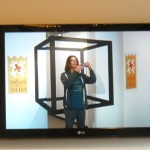 Me encased in an optical illusion at the Escher Museum. 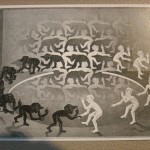 One of Escher’s best works. 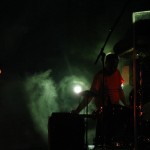 Pete was caught in some vortext in Den Haag. 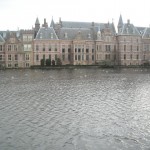 Proof we were in the Netherlands. 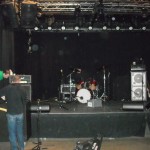 Setting up at Club 4AD in Diksmuide, Belgium.