For my part, down-time in the van allows me to correct string parts for my composition “Vines For Music” (for prepared piano, 2 ‘cellos and 2 violas).  And to re-write the percussion part for “Music for 3 percussionists, 2 string trios and electric organ” so that percussionists can actually read the damn thing.  Of course this was in the down time when my brain was working well, which admittedly, was not often in our sleep-deprived travels…  Clint thought I was composing while listening to punk rock, but not really – this is mostly mechanical work.

Alesh does this kind of driving and road management for bands as part of his living.  He has told us stories many crazy stories of being on the road w/bands.  I said to him: “It must be weird because we’re so normal.”  He said “With you guys it’s like a vacation.”

OK.  2 accidents on the road to Berlin, so it took 11 hours instead of 9 and we didn’t arrive in time for soundcheck.  Quick dinner, very fun opening band (Delta Love), and with just a line-check, everything was on “Go.”  Packed house, and I was thinking “Berlin – they’ll probably be too cool to like us.  FINALLY we’ll have a bad gig…”  Nope, not at all.  Rippin’ set.  Bob said it was the best sound in the house on the entire tour (because we didn’t have a sound-check?).
Which brings up how Burma works:  At the last three gigs (Balogna, Zagreb, Vien) we were the only band playing and had a fine relaxing soundcheck.  Every one of those shows had something odd to drag it back a bit.  In Berlin (and also Zurich), we had no soundcheck, had to hurry on, and had no idea how people would react.  And those were the best two gigs on the continent so far.  I guess it fits our haphazard way of moving forward – the less we know, the less planning we do, the better things are.  Wakt.

Eating breakfast in the pub where I went out last night w/Alesh and his friend Anka to have a couple Lagavulin 16′s and get my clothes drenched in cigarette smoke.  No smoke now, excellent hi-quality breakfast ingredients.  Mild reggae on the stereo.  Could be a lot worse!

So we get to sight-see in Berlin.  Go to the Brandenberg Gate which separated East and West Berlin.  Bob and Pete and I were there in 1989 on that Euro-tour (V.Suns/NoMan), and it was a very different scene then, 3 weeks after the wall came down.  It had been ecstatic partying and release.  Now, crossing the Gate to the “eastern” side there was a guy in a Micky Mouse costume, a Darth Vadar costumed person, etc.  Yipes.  Was the Starbucks really a good thing?
Then we went to the Holocaust Memorial.  Really amazing, simple, deep.  (see photo).  Finally, after odd circular drivings looking for a sweatshirt for Pete (his got melted on a stage light in Vien), we ended up at the Ramones Museum.  At first we thought it was too silly to go there, but it was actually quite cool with artifacts galore.

Van listening driving half-way to Holland: Converge.  Dillinger Escape Plan.  This hyper-metal music is pretty interesting, but the vocals always sound like we are watching the Exorcist.  Why haven’t any of those bands tried a Dean Martin-style vocalist?  That might make produce interesting result.

Hannover Vietnamese dinner was quite good, relaxing night off.  Were not attacked by Fellini characters. 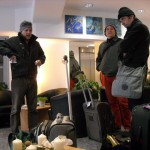 We prepare to depart the Hotel. 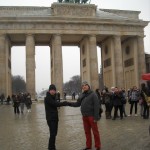 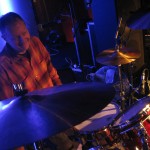 Pete at Soundcheck – something must have been going right! 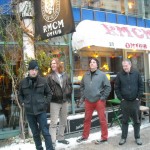 Burma at the Ramones Museum (Berlin).