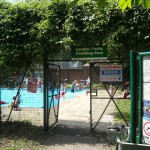 June 29: Welcome to Sunny England! Proof the whole thing about rain in England is a lie, fabricated for early American colonists to keep them from going back. Lounged in the park on our day off/adaptation day before things kick in. Saw part of Rolling Stones performance at Glastonbury on TV. They should seriously think about hiring a new singer, preferably one that is not a goat. 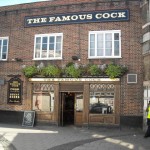 June 30: Yeah, this was my pub. Garage Club in London was a bit spiffied up since we last played there (2002), but all was good. Fire-folks showed up and helped sell merch. Cool. 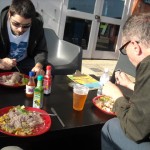 July 1: Dinner on the beach in Bristol w/Pete and Ozak (our driver this round). The Haunt had an early 80′s NYC vibe, not super-well attended, but fun. The 2-star hotel we stayed at deserved only a 1-star. When Pete and I finally got a room with two beds, Pete noticed water dripping down from the ceiling lamp in the bathroom. 45 minutes later they’d found us another room. Zero-star hotel bummer. 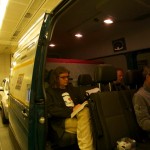 July 2nd: We all thought you DROVE through the Chunnel to get to the continent. Nope. You drive your car onto a train, then read a book to avoid the non-scenery. My current book, a real doozy, too: “The Origin of Consciousness in the Break Down of the Bicameral Mind”, by Julian Jaynes. Very interesting take on language as the forming pulse of civilization, and the curious way the brain interacts w/language, creating Gods, etc…… 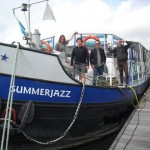 July 2nd: This is the hotel we stayed at in Amsterdam – Summer Jazz Hotel on the Canal. The Winston Kingdom show was the best gig we’ve ever had in Amsterdam – great crowd, and despite my barely being able to hear my guitar, I was at least able to see my fingers and deduce that I hadn’t made any major errors. 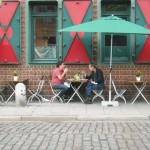 July 4th: Hamburg waterfront very cool. Third night of Vegan dinner feed from clubs – none of us fall under that umbrella-term, but the food was quite good. At Hafenklang club, Pete could hardly hear a thing onstage, and the lights were such that I was incapable of seeing my guitar frets except at very specific angles. So our set was sloppy punk rock – but the audience was totally on our side. Punk Rock alive in Germany. Sold out of the vinyl UNSOUND this eve. Could be worse! 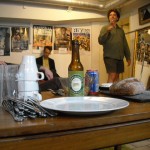 July 5: Malmo, Sweden, was very nice – sunny (it’s always sunny in the north sea area), nice walking city. Plenty of bikes. We had an excellently catered dinner and a gent brought some Swedish micro-brews espec. for me, and they were quite good! The show was oddly uneven for us – we could never really get full-throttle until (sort of) the end portion of the set. But still, there was much appreciation in the audience. In re-reading the Munster club press blurb, I note they list us as “the Kraftwerk of Indie Rock.” Curiouser and curiouser…. 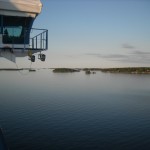 July 6:  Long drive to Stockholm, then onto an overnight 15 hour ferry ride to Helsinki. Should we use Kronor or Euros on the boat? What difference does it make? The boat was more amusing than I thought it’d be, and we’d all run into each other sporadically on various decks. Pete and I had an exceptionally good dinner of white-fish with some sauce us Wild Westerners couldn’t identify. 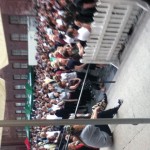 We all got a surprisingly good sleep on the ferry, and checked into our hotel. I took a walk to the Botanical Gardens, had a brief nap on a bench (what, a bum?), then worked more on the frottage drawing I started in Hamburg. The festival was quite fun, and we played a really good set. What a relief to feel like Mission of Burma after our rather weak performance at Malmo. Negative Approach and Chelsea Light Moving were highlights of the evening. 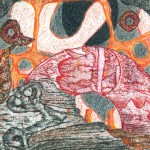 July 8 – Helsinki to Home: Hung a bit with Lydia Lunch, Negative Approach and Thurston Moore this morning at the hotel, before the long travels home. Got to bed at midnight in Somerville – that’s 7am to me in Finland…. Such is fate. Hamburg Harbor Frottage, incomplete.